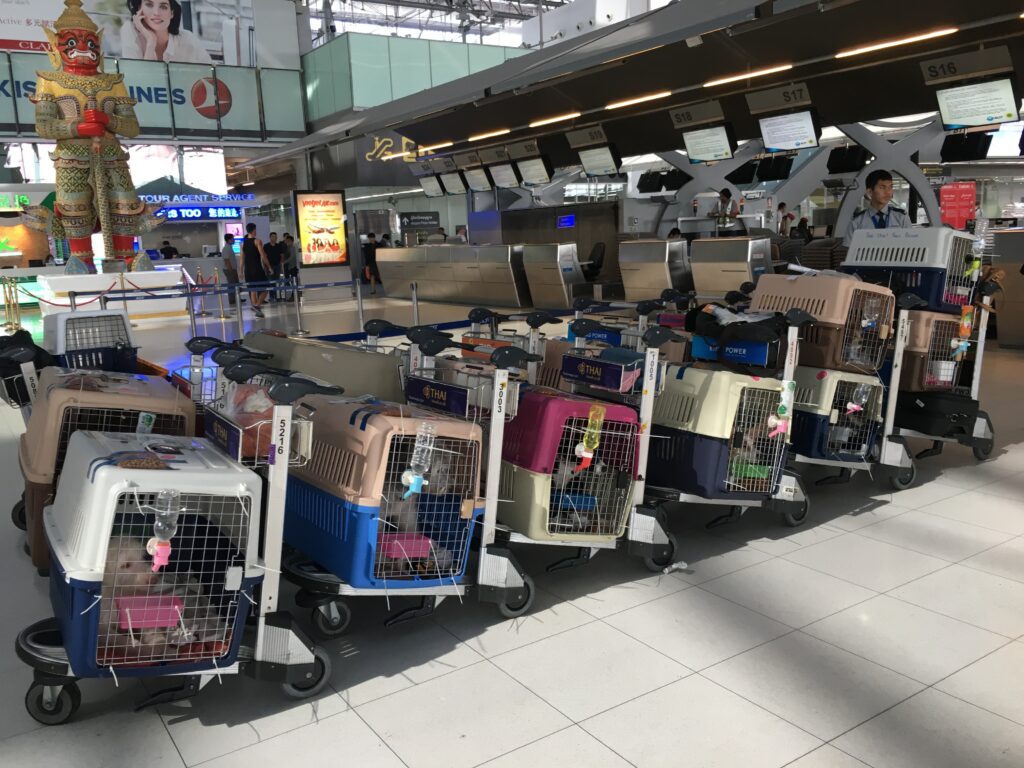 In 1992 when we started this venture to save lives, the shelters in and around our city were packed.  Completely adoptable dogs were being killed every day due to a lack of space or just because their time was up.  It didn’t matter how cute these dogs were – they were given a set amount of days and then they were put to sleep.  There was no structure in place for networking, working with rescues, or doing anything additional to try to get these animals into homes. Animals were adopted out not fixed and there were no spay/neuter initiatives.  We would go into the shelters and be given a list of 45 plus dogs and cats who were to be killed the next day.  The majority were completely young, adorable, and very adoptable.  And the same thing would happen the next day and the next.  The need for us to save these animals was tremendous.  The shelters were being forced to kill way more animals than they were ever seeing walk out the door into new homes.

So in 2013, when we first started this International crusade, we asked ourselves the same questions, as did our volunteers and supporters about why we are going out of the country to help animals.  In our part of Southern California, we and the animals here have been incredibly lucky to see a tremendous change.  So many people have banded together to make a real difference in the lives of the animals in our Los Angeles Shelters today.  We have the city of Los Angeles pushing to become No Kill, and its own initiative that has greatly pushed it into that direction. Our own Ventura County shelter is now No Kill after years of being the shelter we most frequented due to the number of animals being put to sleep. Chihuahuas and other hard to place small breeds are being flown out of California and into other states where they are being easily adopted. Through a major push of marketing, spay/neuter, coalitions, and networking- our shelters of today in the Los Angeles area are heading in the right direction to make the killing of completely adoptable animals a thing of the past. Unfortunately, many of the ones slated for euthanasia are dogs that we would have a hard time placing as well, and usually cannot rescue no matter where they come from.

We will never stop rescuing locally as we have done all these years and we now focus on local medical and surgical need rescues as our finances permit.  We feel that with our city making great strides in our own pet overpopulation problem, we can and should try to expand our efforts to include some extremely lucky dogs.

Thailand- Dogs are living by the thousands on the streets, fighting every day to survive. They are attacked with machetes, poisoned, run over. Their lives mean very little. They die from abuse, or starvation. The submissive ones that don’t meet that fate, are bullied and attacked by the larger more dominant street dogs. Then we have the horrific meat trade. Poachers grab dogs off the streets, and steal by the hundreds dogs out of owner’s back yards, cram 10-12 dogs at a time into a tiny wire cage, and transport them over the border into Laos, Vietnam, and Cambodia. It is a 3-day journey where they are given no food or water, and many die along the route, or break legs and other parts in the cages they are stuffed into. If they survive the journey, they are then skinned and boiled alive for their meat and served as a delicacy in restaurants. They feel keeping them alive as long as possible through this practice makes the meat more tender. This has been labeled the DMT- dog meat trade. Through rewards offered for information, some poachers have been caught and dogs have been saved, only to then be put into shelters that make our shelters here look like Ritz Carltons. They sit there by the thousands, attacking each other, and dying of injury, starvation, and illness. They will never get out and any sort of humane death would be a welcome ending for most, but they are not given even that.

China- The meat trade here is continuous throughout the year and all over the country.  The more recognized Yulin Meat Festival spans 10 days and approximately 12000 dogs are killed for their meat during this time.  They are tortured and suffer extreme brutality before a ruthless and vicious death.  Many are stolen pets still wearing collars.  It’s estimated between 10-20 million dogs are killed every year for their meat.

Korea- Dogs are bred and farmed for their meat. They are raised in cages stacked and lined up by the dozens at each farm, filled with filth and excrement while they await their execution.  Many die in the cages beforehand.  South Korea is one of the only countries that farms dogs for their meat.  Larger dogs are used for dog soup, called Bosintang.  Little dogs are used for elixirs and potions.  They are slaughtered by the millions in horrifically cruel ways.

Doha, Qatar- Many of these dogs are used for racing.  They only race them for one season before wanting a new racer.  Many race dog owners cut the ears off the dogs thinking this will stop the wind from flapping their ears and making them run slower.  When they can no longer race at an incredibly young age, they are taken into the desert and either shot, or their legs are intentionally broken to stop them from returning to their owners.  The summer heat gets to over 135 degrees Fahrenheit, and many of the dumped die of heat exhaustion, starvation, and thirst.  There is no government facility for animals throughout Qatar, so other than a couple rescue groups trying to help, the stray population and cruelty continues with no consequences to those responsible.

We are so fortunate to live in a country where we are taught love for animals, kindness to others, and embrace dogs and cats as members of our family and cherished pets.  A country where people that inflict cruelty to animals are convicted and punished and we feel outraged at their actions.  Dogs in other parts of the world do not know of this kindness and have never felt this compassion. Dogs that without us, will die cruel and unimaginable deaths that in this country, we can’t even begin to fathom happening.

It has become part of our mission to share some of our love and treatment of animals with those so much less fortunate.  To give a dog that has only known cruelty their first kind word and loving touch.  Their first home.

We can’t save the world. We can’t even begin to make a dent in the atrocities that go on in our world every day. But a life is a life no matter what country their fate put them in. These dogs stand zero chance of survival, and are destined to die a horrifying death.  Rescue should not know borders, and no matter where a dog is saved, that is a life saved that should be embraced with open arms no matter the origin.